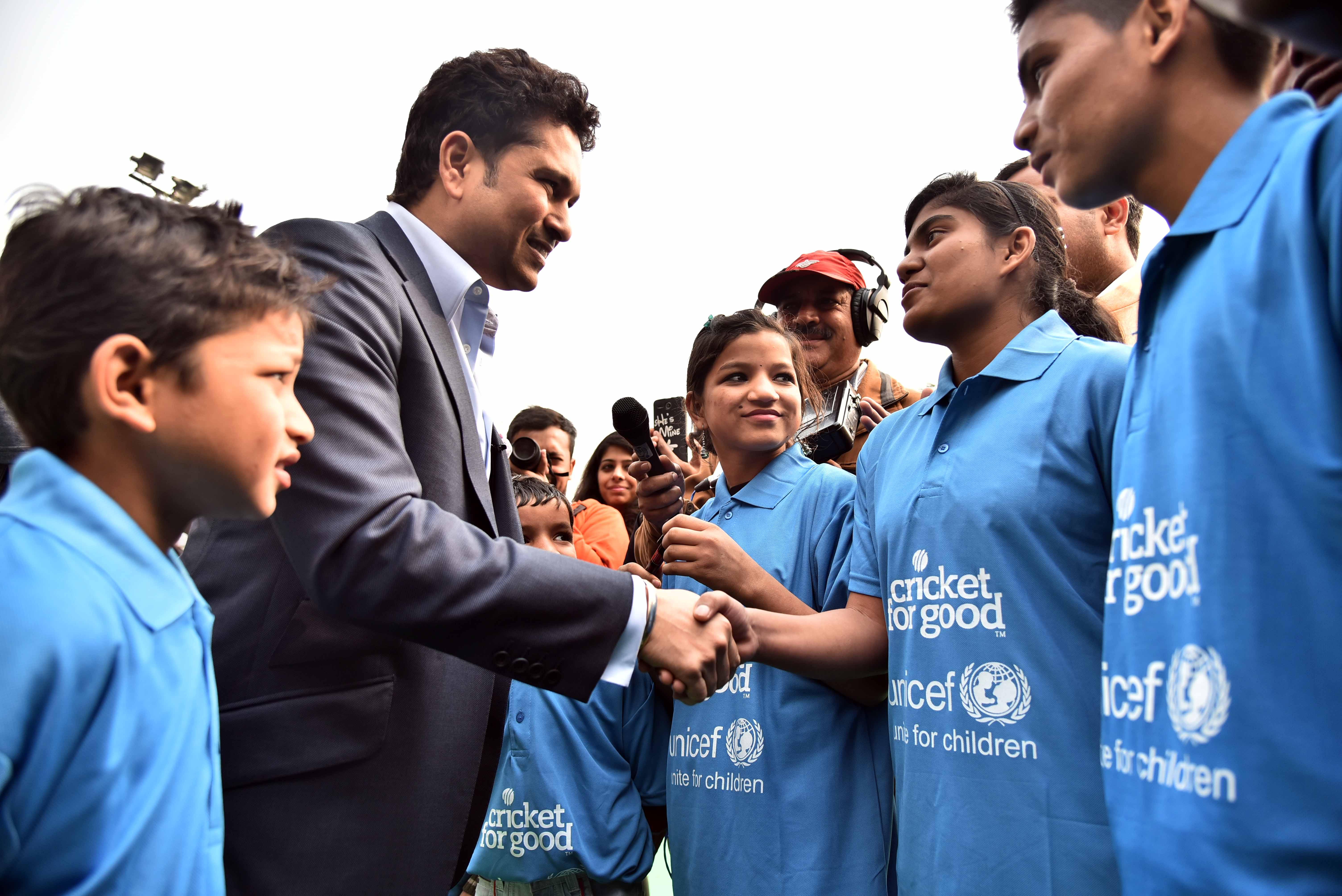 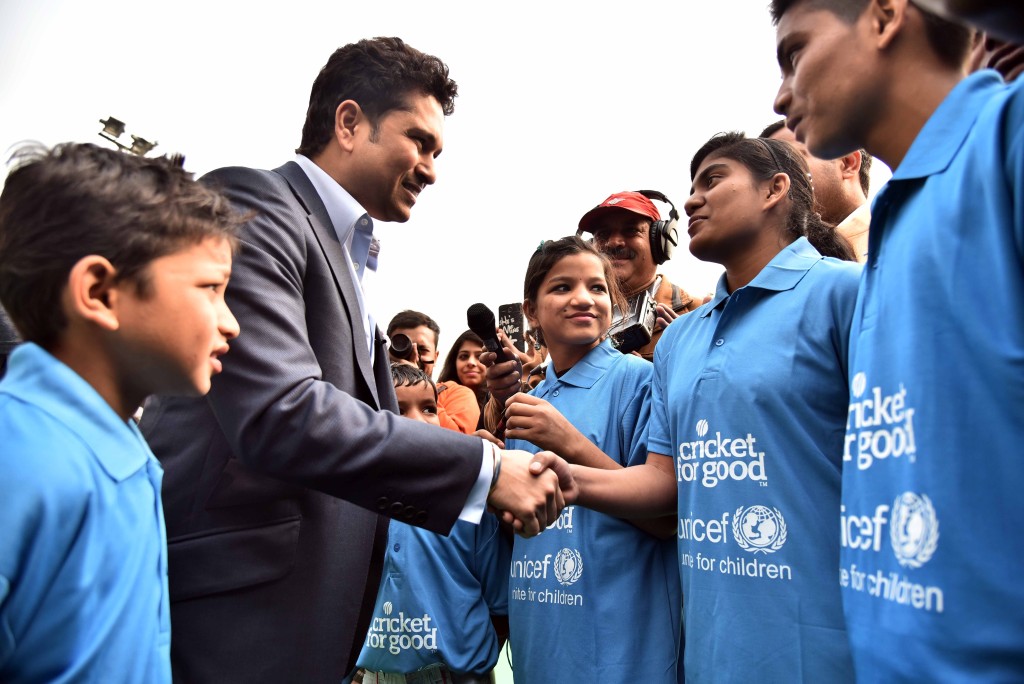 Sachin Tendulkar with the school children who are part of the Swachh Team.
Photo credit: UNICEF

Cricket icon and Bharat Ratna Sachin Tendulkar wielded his willow once again, not to bail out the beleaguered Men in Blue currently battling it out in Australia, but to bat for Prime Minister Narendra Modi’s pet project, the Swachh Bharat mission.

In the city recently Tendulkar, also a UNICEF Goodwill Ambassador, played a game with children of a local non-governmental organisation (NGO), Nine is Mine, using the opportunity to interact and share ideas with the children on ways they could spread the message of ending open defecation among their peers and communities. Tendulkar is also one of the celebrities nominated by the Prime Minister to spread awareness on cleanliness when he kicked off his ambitious campaign on the 145th birth anniversary of Mahatma Gandhi.

But it seems that the Clean India campaign has caught the imagination of folks not just in this country but beyond.

Leveraging the humongous reach and power of cricket, the International Cricket Council (ICC) too padded up to uphold the Spirit of Cricket and bringing about positive social change through the sport, by launching Cricket for Good, in association with UNICEF and Board of Control for Cricket in India (BCCI), in the Capital recently.

“UNICEF hopes to harness the reach and power of cricket, one of the world’s most popular sports, towards the most important cause of all: saving the lives and futures of children,” says UNICEF Regional Director for South Asia, Karin Hulshof.

Team Swachh is the first of a series of collaborations between the ICC and UNICEF under the aegis of Cricket for Good. This endeavour aims to build a social movement for sanitation and toilet use, thereby leading to an open defecation-free India.

The five-year global partnership was announced in October 2015 in New York and will be used as the ICC’s platform to advocate for children in India and other countries where cricket is a popular sport.

David Richardson, ICC Chief Executive, who was present at the launch of ICC Cricket for Good and Team Swachh campaign, in the city, reaffirmed ICC’s commitment to work with UNICEF on initiatives to improve the health, education, nutrition, protection and sanitation of children.

A Team Swachh action kit, featuring a unique cricket and game-based tool-kit for WASH (Water Sanitation & Hygiene) in schools was also launched during the event. The kit contains a set of exciting cricket-themed WASH games, along with an implementation handbook and Team Swachh campaign materials featuring the Team Swachh cricket star ambassadors.

Optimistic about the campaign, Richardson says, “Building up to the ICC World Twenty20 India 2016, there will be an eight host city tour starting next month that will use exciting cricket-based sanitation and hygiene games to engage with school children. During the event itself, there will be coaching clinics with participating teams.”

“I’m sure that the coaching clinics, which will see active participation from the leading cricketers of the world, will inspire and encourage my fellow Indian citizens to contribute to this wonderful initiative,” Anurag Thakur, secretary BCCI remarked. 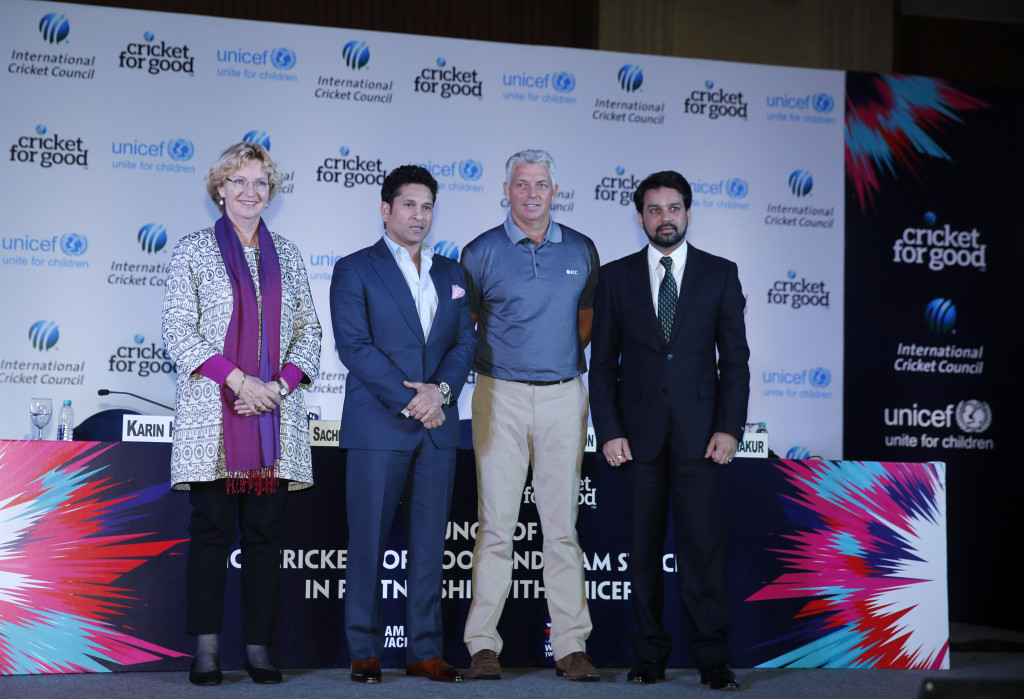 ICC and UNICEF will engage the cricketing community to empower children and, develop and implement various community outreach programmes and initiatives in collaboration with coaches, cricketers and cricketing personalities, he added.

The focus will be to improve sanitation and strengthen the Team Swachh campaign of the UNICEF-WASH United alliance to make a difference, and inspire people to initiate a change and take action at the ground level to help make India a clean nation where everyone uses a toilet. Reportedly, more than 564 million people still defecate in the open. Poor sanitation can cause diarrhoea, responsible for an alarming number of deaths in India in children under five years of age.

It therefore becomes even more imperative that everyone join hands to make this swachh abhiyan a success.

As, the master blaster says, “ Ending open defecation; achieving sanitation for all in India, takes a genuine team effort in which all relevant actors – from the Government of India to people practising open defecation, from role models to international development partners – play together as one team.” 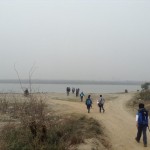 From the pages of a Clean Yamuna diary