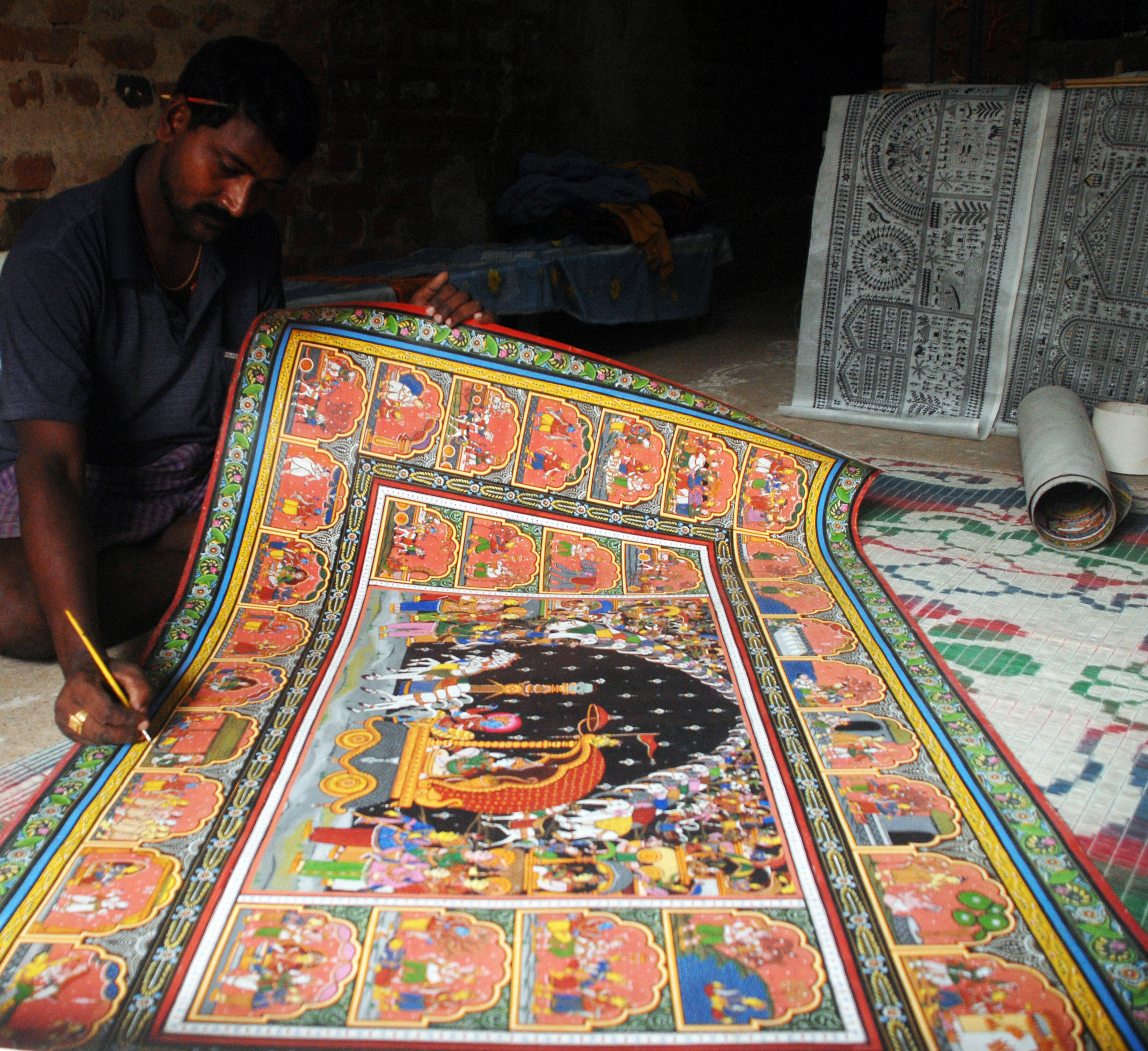 A piece of Raghurajpur travelled with Prime Minister Narendra Modi to France on his maiden visit to the country. He gifted French President François Hollande a pattachitra (a cloth-based scroll painting) on silk titled Tree of Life reflecting the societal respect for nature in India. France will host the 2015 United Nations Climate Change Conference in December.

Even as the village basks in its recent international glory, old-timers recall the efforts of Halina Zealey, an American researcher, and their very own Jagannath Mohapatra to create a studio in every household.

The coconut and palm-shaded village, about 50 km from Bhubaneswar, was initially home to five to six chitrakar families. The fortunes of these artists dwindled at the beginning of the 20th century with the entry of middlemen. Till then, they created pattis for the Lord Jagannath Temple and also sold these at the Bedha Mahal. By the 1950s, only a few old men continued painting. 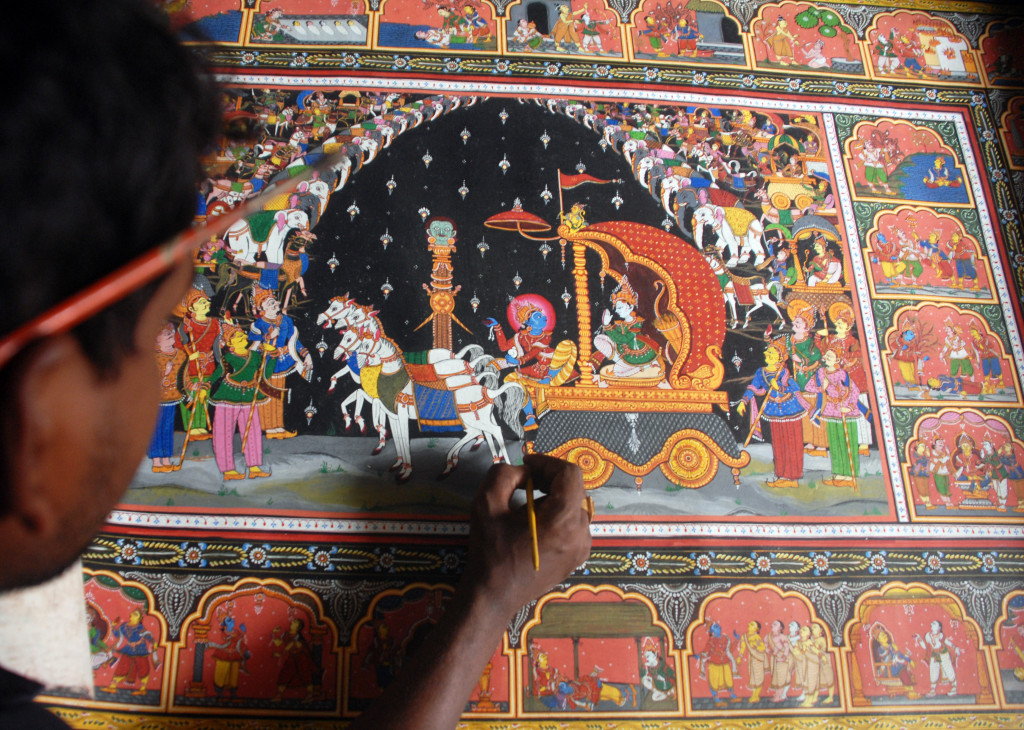 “In 1952, Halina Zealey organised a competition where artists from nearby villages participated. Mohapatra impressed her with a painting on Matsya Avatar (a fish incarnation of the Hindu god Vishnu). But by then, most artists of Raghurajpur had turned labourers who supplied water to betel vines. Mohapatra eked out a living by working as a mason. When the neighbouring Dandasahi villagers joked about it, an aggrieved Mohapatra decided to create an artist in every home,” said Bhagawan Swain of Parampara, an NGO that coordinates the ground-level entrepreneurs of the village.

Swain said Zealey understood the need to promote these products to sustain the art form. “She set up Banijya Vikas Kendra in Puri. Before leaving Odisha in 1954, she gave Mohapatra revolving fund to support the cause,” he added.

While elders work on intricate motifs and designs, children in every household can be seen scribbling figures from mythology and folk lore on their verandah. Their training starts very early. 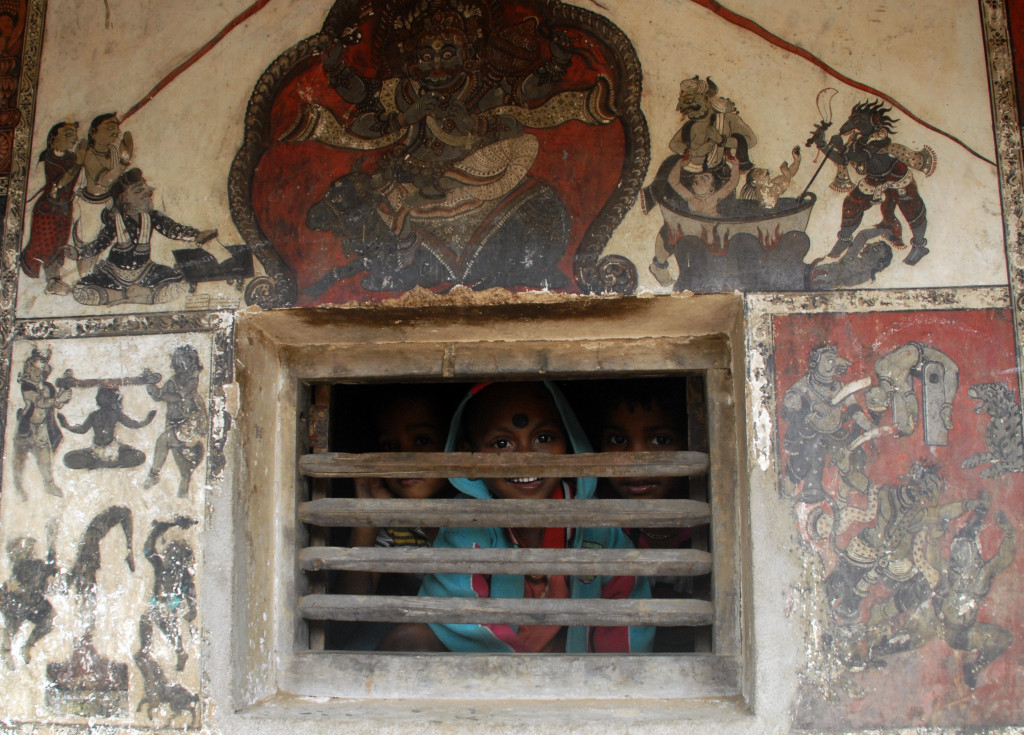 Though Pattachitra is the mainstay of Raghurajpur’s artistic brilliance, an array of other craft items – palm leaf engravings, Tussar paintings, Ganjappa cards, stone and wood carvings, cow dung and papier-mâché masks and toys – are proudly displayed in the pretty households.

Between 2002 and 2005, the Indian National Trust for Art and Cultural Heritage (INTACH) with support from the Norwegian Agency for Development Cooperation (NORAD) and the Odisha government turned the village into a living reference of the Odisha mural painting tradition. Today, mythological scenes from Ramayana and Mahabharata adorn the walls of most houses, neatly arranged in two rows.

“Besides retrieving lost skills, the project is aimed at holistic development of the 120 artist families. Around Rs 50 lakh was spent on a transit restaurant, a small accommodation unit for tourists called Gram Kutir, a crafts centre for display and sale of crafts and an amphitheatre for live performances of Gotipua and Odissi. Another Rs 20 lakh was used on capacity-building workshops. The villagers were given training in hospitality and a village committee was formed to take care of the facilities,’’ said Mallika Mitra, coordinator of INTACH in Odisha. The mural paintings lend a vibrant look to the village, which helps attract tourists, she added.

While Raghurajpur has become synonymous with Pattachitra, its roots can be traced to the traditional Jatri Patti. In ancient days, visitors to Puri carried back Jatri Pattis depicting the tales and rituals of Lord Jagannath as mementos. These were created on a variety of mats or pattis made of layers of old sarees and tamarind gum, which was polished using a scrubbing stone to allow artists to work on a smooth surface.

“We continue to draw inspiration from the Jatri Patti. There has been little change in the manner in which a patti or canvas is made. But brushes have replaced the sticks with crushed heads,” said Sridhar Maharana, son-in-law of Jagannath Mohapatra. Maharana runs a gurukul in the village.

“Pattachitra is an age-old tradition of Puri district, closely associated with the Jagannath Temple. There is no historical evidence to support it. Chitrakar families, spread across the district, used to draw the three deities on pattis, which were put up in the sanctum sanctorum during their 15-day indisposition after Snana Purnima. In all these years, Raghurajpur managed to keep this indigenous tradition alive, while others couldn’t,” said historian Himanshu Patnaik. 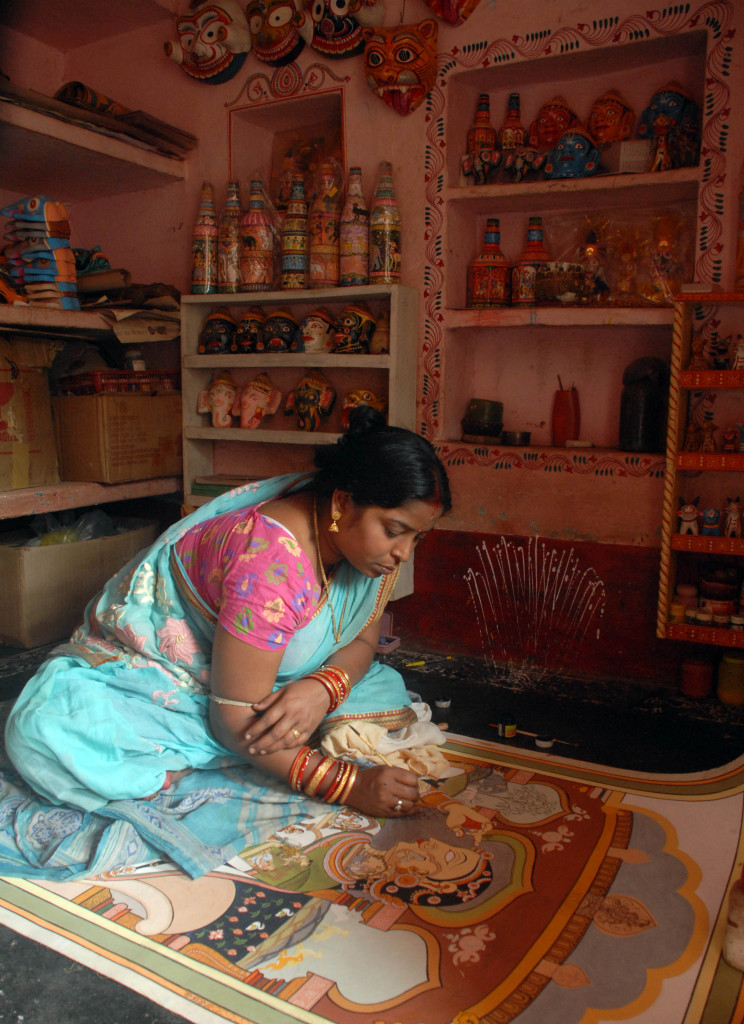 The village also takes pride in its rich Jatra tradition. The Raghunath Deb Temple, which is being renovated, hosted Dhola Yatra, Sahi Yatra and Ram Leela in the past. “A proper platform is being built in front of the temple to revive the rich tradition lost in the mists of time,” said Aka, a young enthusiast of the village.

Another touchstone of the village is Dasabhuja Gotipua Odishi Nrutya Parisad. Established in 1977 by Guru Maguni Das, a Padmashri awardee and recipient of Odisha Sangeet Natak Akademi award, the dance school has played a lead role in the revival of the form, the precursor of Odissi classical dance. Currently, 36 boys are undergoing training at the gurukul, which also provides them formal education till Class X. “It was Maguni Das, who took the dance form to the stage with group performances. It was earlier performed by a single boy alongside the Jagannath yatra,” said Sebendra Das, son of the legendary guru.

Vasant Utsav, in February, is also a big draw. Parampara has been organising the festival since 1994. “The Utsav was the brainchild of Odissi legend Kelucharan Mohapatra who hails from the village. Through the festival, he wanted to promote the art forms and also the village Raghurajpur,” said Swain. 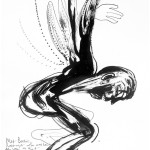 Drawings from my diary 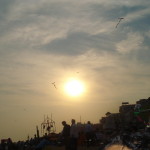